In a constant effort to put a spin of scientific credibility on their police, officers will attempt to characterize as “objective symptoms of alcohol” the officer’s subjective conclusions about the driver, the driving and any conduct during the field sobriety tests and arrest.

Drivers are shocked to read police report descriptions of their appearance, speech, demeanor and conduct. Police typically write that DUI drivers have a disheveled appearance, red and watery eyes, a flushed or red face and slurred speech. Not only do police write such fanciful descriptions, the officers also blame alcohol for the driver’s poor appearance! Police will also try to blame alcohol for any poor driving. They will also claim that alcohol was the reason for any fumbling for the license, stumbling upon exiting the vehicle or slipping while walking. In fact, many of these so called objective symptoms of intoxication, “poor” driving and conduct actually (1) did not exist or happen or (2) can be explained by other reasons that are unrelated to alcohol use. 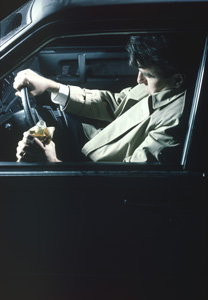 Police may write that the driver appeared “disheveled”, had uncombed hair, a shirt not tucked in, or dirty clothing and maintain that these “facts” demonstrate that the driver was impaired. Lateness of the hour, coming home from work, or fatigue is never considered by police as an alternative and acceptable explanation.

Similarly, police may note that a driver had red and watery eyes or that the driver’s face appeared flushed or red. The officer will attribute these factors to alcohol use, rather than to an innocent condition such as fatigue.

Odor of alcohol on the driver’s breath

Typically, police write about the “strong” odor of alcohol on the driver’s breath. However, like all other “observations,” this can be used to the driver’s advantage. A strong odor of alcohol can mean that the driver just consumed the alcohol and thus support a rising blood level alcohol defense (favorable to the driver). Equally importantly, alcohol has no odor; the additives to it do. Moreover, the strength of the odor has no correlation with the level of impairment.

A police officer may claim that the driver’s speech was “deliberate,” “slurred,” or “thick” yet the same officer had no trouble understanding the information received from the driver concerning the alcohol consumption or any other details that are unfavorable to the driver. Also, any speech issues can be easily explained as resulting from nervousness or fatigue rather than alcohol consumption.

Police reports contain some of the worst “creative” writing when the officers describe their observations of driving. A lane change by the driver is “unsafe”. Any speeding is “excessive”. Failure to pull off the road immediately in response to police is deemed “evasive.” Such labeling cannot go unchallenged. For example, failure to stop in response immediately to police may be because of traffic conditions or the lack of a safe spot to stop.

Conduct after the stop

Police love to describe how a driver “fumbles” through his wallet or her purse and fails to produce quickly the license when, in fact, the person is nervous or tired. Police never consider that a driver may have been behind the wheel for a period of time as a reason to explain a driver stiffly exiting the vehicle. Instead, the officer may write that the driver exited the vehicle with “great difficulty.”