What are field sobriety tests (“FSTs”) and how do police use them against you? Police will never tell you that you are not required to perform any field sobriety tests. On the contrary, they will insist that you do so to avoid arrest. Please immediately call the Law Offices of Mark Blair for a free, confidential and informative consultation to learn more!

As in other aspects of DUI law, law enforcement and prosecution agencies try to make field sobriety tests appear to be “scientific” and thus “infallible” and “objective” when instead they are anything but. 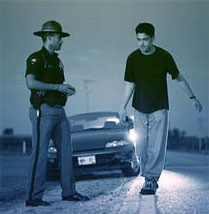 Traditional field sobriety tests are exercises that officers have drivers perform, most often at the site of the DUI stop (hence, the name, “field” as “in the field” or at the scene). The purpose of the tests, in theory, is to assist the officer in determining if there is probable cause to arrest the driver for driving under the influence of alcohol and/or drugs. However, it is my opinion that at the very first contact between the driver and the officer, when the officer detects an odor of an alcohol additive on the driver’s breath, the officer almost always makes the decision then and there to arrest the person. However, to build the most incriminating case against the driver as possible, the officer stretches out his/her investigation to get as many incriminating facts before actually arresting the driver.

Therefore, the reality is that field sobriety tests are just another one of many areas of information gathered by the officer to use against the driver.

The tests involve physical and mental performance, as well as an eye examination. The first test, designed to measure the driver’s balance, is a walk and turn (also known as the “walk the line” test), leg raise/one leg stand and the modified position of attention. Inherent in the evaluation of a driver’s performance is the subjective opinion of the officer. The “performance” is measured thru the eyes of the observer, the officer, who has every intention of arresting the driver and is looking for any and all reasons to “fail” the driver in his/her performance of the tests. Moreover, the tests are performed typically when the hour is late, the driver is exhausted, lightening is poor at best, the temperature is chilly and/or windy, the footing unsound (often rocks and debris are present; the grade of the surface is not flat but sloped) and traffic noises and lights are terrible distractions. In addition, physical limitations, illnesses, shoes and clothing can impact performance on field tests.

In addition to the flaws that the balance tests share in common, they suffer from additional shortcomings unique to each test. For example, the walk and turn test (“walk the line” test) often suffers from the uses an imaginary line. The poor driver has to envision a straight line, often with no other details of length or width. The modified position of attention test assumes that the driver not move when he/she has his/her head tilted back and eyes closed! Any sway is an indication of consumption of alcohol. However, studies show little correlation with movement on this test and alcohol use. Moreover, given the unfamiliarity of the typical driver with such a test, it should be expected that any person sway during the test.

A second group of tests measures coordination. These tests include the “touch your nose” test and “touch your finger to thumb” test.

A third set of tests mental rather than physical coordination. This group includes the written alphabet and the reverse counting tests.

The last category of field tests are eye exams, typically involving gaze nystagmus, an imperfect estimate by the officer of the angle of onset of the “jerking” of the eye when tracking a moving object. The earlier the onset, the theory goes, the greater the impairment. Theoretically the officer can calculate the approximate blood level of alcohol of the driver based on the angle at which the nystagmus begins.

The National Highway Traffic Safety Administration became involved in field sobriety testing by standardizing the tests and certifying officers as being appropriated trained. The National Highway Traffic Safety Administration sponsored research that concluded that when a driver displays a minimum number of “clues” of impairment, there is a certain percentage chance that the driver has a .10% or higher blood level alcohol. The NHTSA has three tests: the walk and turn test, the one leg stand test and the horizontal gaze nystagmus test as its standardized tests whose clues suggest impairment.

Are these tests “scientific,” “objective,” and “infallible?”Absolutely not! Despite their rhetoric, the tests are poorly administered. The conditions under which the officer administers the tests must be examined and attacked. Typically, as stated above, the conditions could not be worse: the driver is exhausted, the hour is late, the lighting is poor, the weather is adverse, the terrain is not free of debris and is not flat, and road related distracts are constant.

Another area of attack on the standardized FSTs is the improper use of scoring. Officers routinely claim that drivers “pass” or “fail” a field sobriety test when the NHTSA specifically warns that a person does not pass or fail the tests. NHTSA requires officers to note signs of impairment rather than grade the tests. Grading of tests by the officers is just another display of the officer’s bias against the driver.

Lastly, the tests themselves can be attacked. The very studies that suggest that a certain percentage of drivers are at or above the legal limit shows that the remaining percentage of drivers IS NOT above the limit. Which one is the driver in question? Clearly, the officer demonstrates how biased he or she is when he/she posits that the test results show that the driver was impaired.