As soon as police detect the odor of an alcohol beverage, they attempt to have the driver blow into a small tube like device by the side of the road. Why do police do this and how can you prevent the use of the test result? Police will never tell you that you are not normally required to submit to a preliminary alcohol screening device test. On the contrary, the PAS test will be presented by police as necessary and may even misstate the law that a failure to perform the PAS test will result in suspension of one’s driving privileges (please note: adults not on probation for DUIs may decline a PAS test; persons under 21 or on probation for DUIs must perform the PAS test).

Learn more by immediately calling the Law Offices of Mark Blair for a free, confidential and informative consultation! 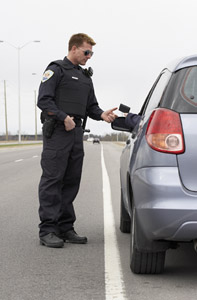 “PAS” or preliminary alcohol screening devices are instruments used by police at the scene of a DUI investigation to obtain blood alcohol levels.   Police in California use either a fuel cell “PAS” instrument or a Taguchi gas sensor “PAS” device.

Police try to have the driver blow into a “PAS” device as quickly as possible so that they may establish as close to the time of the stop as possible a blood level alcohol reading. Later, upon arresting the driver, the police will insist (and the driver must comply) upon the driver providing a blood or breath sample that again will yield a blood level alcohol reading. The goal for police and the prosecution have two goals. The first is by obtaining two different sets of numbers at two different time intervals that they will be able to extrapolate back in time to the time of driving to determine what the driver’s blood level alcohol is. The second goal is to prevent the use of a “rising blood level alcohol” defense by a DUI attorney. To thwart this law enforcement strategy, please contact a competent DUI attorney who can review the particular facts of your case.

Like other instruments, “PAS” devices are surrounded by the aura of “scientific” reliability. However, they are in fact susceptible to various problems and their results are suspect. Their use must be vigorously attacked and their aura of reliability stripped away.

Fuel cell readings may vary based on temperature at the time of their use. Over time, repeated use will cause contamination of the device and thus, potentially elevated blood alcohol readings.

Taguchi gas sensor “PAS” instruments use two varieties of sensors. The sensor may, like its fuel cell counterpart, fail to differentiate between ethanol and other chemicals and thus cause the instrument to have an artificially high reading. The sensors are also, like fuel cell “PAS” instruments, sensitive to temperature. Its results may vary from one temperature to another.

Both fuel cell and Taguchi gas sensor “PAS” devices may read mouth and not lung alcohol. As they do with drivers taking breath tests with the stand alone breath machines, police ought to monitor a driver for at least 15 minutes before administering a “PAS” test so that the air sample is not contaminated by mouth alcohol from sources other than air from the lungs, such as belching, burping or vomiting. Mouth alcohol can also exist because of dentures or other dental apparatus that trap alcohol and cause alcohol to be breathed from the mouth into the PAS device.

In addition, persons with lung or other ailments may experience great difficulty in blowing what the officer considers a sufficient sample for the device to analyze.

As with any breath device, the “PAS” instruments must be properly calibrated periodically according to their manufacturer’s specifications.

Various California police agencies are introducing new “PAS” devices for use not only as an initial testing device at the scene but also for the substantive test (final test) now performed by the stand alone machines typically used after a driver is arrested. These new hand held devices, however, have some of the fundamental shortcomings as their predecessors: they cannot differentiate between mouth and lung alcohol.

The proper cross examination of prosecution witnesses is critical to limit and even exclude the use of “PAS” devices and their results.